To the Prime Minister of Pakistan, Mr. Imran Khan

We write as an informal group of organisations and individuals who are scholars, religious and secular leaders, human rights advocates and practitioners concerned with the laws enacted in Pakistan which are broadly referred to as Blasphemy Laws. In fact Chapter XV of Pakistan’s penal code refers to six “Offences Relating to Religion”. Four of them relate to religion in general and outlaw a number of acts ranging from trespassing on places of worship to “malicious acts intended to outrage religious feelings”. Two of them specifically refer to the religion of Islam. One in particular, 295C calls for punishment by death or imprisonment for life for anyone who “by any imputation, innuendo, or insinuation, directly or indirectly defiles the sacred name of the Holy Prophet Muhammad (peace be upon him)”.

The signatories of this letter welcome all efforts to improve inter-religious and inter-cultural cooperation and tolerance in Pakistan and recognise that there are many citizens who are engaging in such actions to create a safe non-violent space for all believers of the country.

We support four basic principles in this respect:

· The right of any person to choose or change their own form of religion or belief.

· We all have the right to express ourselves in the way that we chose even when this may be hurtful to another. This should only be prohibited when such expression is a) hate speech and/or intended to cause or foment violent action b) contains information about an individual or group that are factually incorrect. Otherwise, we should allow such expression, however distasteful it may be.

· Any interaction between religions should be peaceful, positive and tolerant in their approach.

Each and every one of us should, as a matter of good conduct, ethical standards and respect for our fellows, refrain from denigrating another’s belief. However, we accept that this principle is not legally enforceable and one has to balance such a standard with another’s right to freedom of speech.

There is a border line between free speech and hate speech. We consider that Hate Speech is a communication that primarily carries no other meaning than the expression of hatred for some group, especially in circumstances in which the communication is likely to provoke violence or generate fear to that person or group’s physical safety. Hate speech is an incitement to hatred primarily against a group of persons defined in terms of race, ethnicity, national origin, gender, religion, sexual orientation, and the like. Hate speech can be any form of expression regarded as offensive to racial, ethnic and religious groups and other minorities or to women.

Neither are there any justifications for enforcing any particular belief on another person or group if that person or group does not wish to follow it – especially by placing such persons in fear of their lives by physical threat, violence or other forms of coercion.

It is our view that blasphemy laws, clauses and references should be repealed and replaced, where not already existing, by laws that call for respect of all religions but place proportionate legal penalties on hate speech and any intention to create physical harm or generate violence based on disagreement with another’s belief.

Specifically we call for Pakistan’s Chapter XV to be amended, repealing any death sentence unconditionally and otherwise revising the legislation to reflect that legal punishment for offences against religion are based solely on actions which cause physical harm or which threaten or are likely to threaten the physical integrity of any person or religious group in alignment with the above definition of hate speech.

We have no wish to interfere with Pakistan’s determination to hold Islam as its state religion.

Islam is a religion of peace and respect and we consider that any expression of violence in the name of Islam (or other religion) is founded on an incorrect understanding or misapplication of Islamic principles.

In alignment with articles 1, 2, 3, 18, 19, 20, 21 and 27 of the International Covenant on Civil and Political Rights, which has been ratified by Pakistan in 2010, we therefore respectfully request this law be revoked or amended in accordance with the above.

We would be more than happy to meet with and assist with appropriate representatives in charge of Pakistan’s religious affairs if they would feel this appropriate.

• Association for the Defense of Human Rights and Religious Freedom (ADHRRF)

• Center for Studies on Freedom of Religion, Belief and Conscience (LIREC – Italy)

• Gerard Noodt Foundation for Freedom of Religion or Belief

President and CEO, Center for Inquiry

Board of Governors Professor of Political Science

Executive Committee of the UNESCO Chair for Genocide Prevention

Center for the Study of Genocide and Human Rights (CGHR)

Protestant Church in the Netherlands 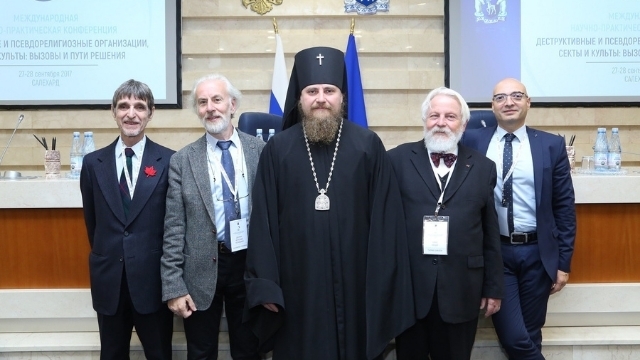